“We guarantee that everything will be fine”

You are here: Home1 / Blog2 / protocol3 / “We guarantee that everything will be fine”

If Jean Paul Wijers set up his company again tomorrow he would never call it Protocolbureau because of the association of ‘protocol’ with Royalty, formality and many formal rules. “The truth is however that protocol today has not always to do with formalities.”

“We guarantee that everything will be fine” in het Nederlands 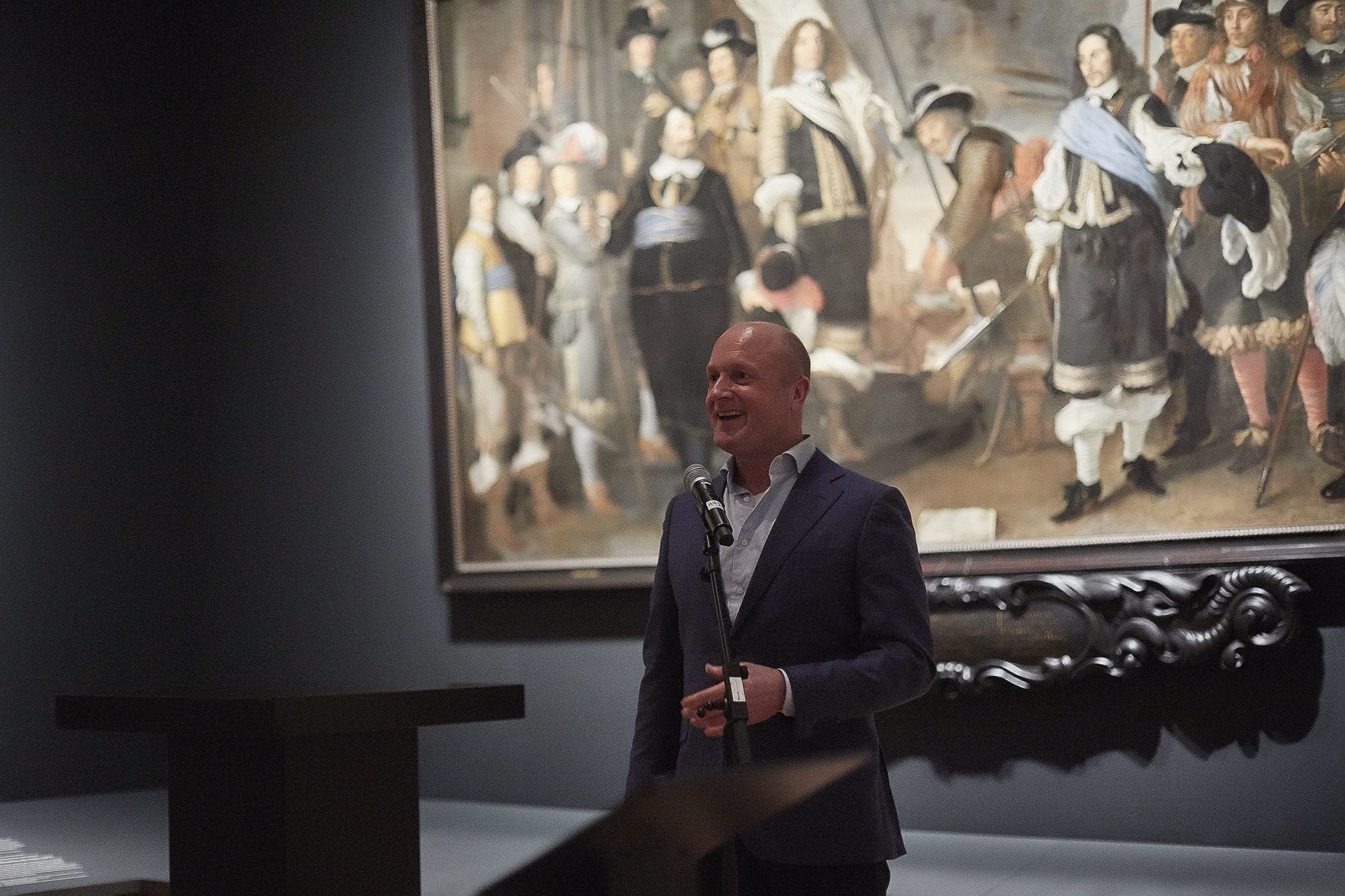 This article is written by Carla van Elst (before the start of the Coronavirus pandemic) and was originally published on the website of the Dutch Association for Event Managers, the ‘Genootschap voor Eventmanagers‘ and translated into English with the help of William Hanson (dit artikel in het Nederlands).

What then is protocol? On the one hand there is  the ‘rule side’ of protocol: the rules that create a moment where effective meetings can take place. On the other hand, there is the symbolic side of protocol: symbolism that adds extra value to a meeting. “A good protocol officer is able to stop the time, to create peace of mind for authentic encounters. And they ensure the symbolic value of the meeting is incorporated into the storyline of an event.”

Of course, protocol does have something to do with Royalty. A Royal presence at an event is a good reason to hire Protocolbureau. For example, they take care of all protocol issues or provide the ‘secret protocol’. Jean Paul Wijers: “Often an organisation itself provides the supervision and we are there to ensure that everything around it is properly arranged: everyone is in the room on time, the right seats are free for the VIPs. But if something goes wrong – suppose someone is in the wrong place – we intervene. If all goes perfectly, then no one notices our constant monitoring.”

“When I started Protocolbureau, I never imagined I could turn it into a company that’s been around for 25 years,” says director Jean Paul Wijers. “What I would like to change is the image that people sometimes have of me. They think that I sleep in a three-piece suit and hoist the flag here every morning singing the national anthem! In reality, I am rather progressive and liberal. Anyone who knows me knows that I am not making things overly formal – anything but!”

Another good reason to call in Protocolbureau is the presence of VIPs at a meeting. What to do in case of many no-shows and the seating has to be changed at the very last moment? “Many organisations think they can manage that very well themselves, until things go terribly wrong.” Of course, the services of Protocolbureau include much more than assistance with Royalty and VIP receptions. In addition to the special seating programme Protocolbureau has developed, the bureau offers protocol staff at all levels. They can also tell you everything about titles, how to write a letter to the King or how to start a speech. “We offer a full-service product and really go all the way for our clients. But our most important selling point is peace of mind. We are the guarantee that it will all be fine – more than fine!”

One of the important trends in the event business – now and in the future – is that we no longer want to rush somewhere in total stress due to heavy traffic. To reach there, in a crowded room, with loud music, where you can’t speak to anyone or to find out that there is no one interesting you would like to meet.

Protocol to bring people together

Protocolbureau was established in 1996, shortly after Jean Paul Wijers graduated from the Hotelschool The Hague university. “At the time, I was surprised that protocol at the Hotelschool was not taught as a subject. People thought that protocol had nothing to do with hospitality, while I saw it as a wonderful tool to bring the right people together during the hectic pace of a meeting. An innovative and progressive idea, which I already had as a student, and which is still the basis for what we do at Protocolbureau.” Sadly, in recent years, people’s opinions about protocol have changed quite a bit and the anti-protocol attitude has become more prominent. “You have to ask yourself: what is protocol still worth, under those circumstances? We wanted to highlight that. Which was always the intention from the beginning, but now we were forced to give a good answer to that challenge.” The answer is that the time of unnecessary formalities and ‘protocol fetishists’ is really over. But that protocol is, at the same time, more relevant than ever, which has everything to do with today’s hectic pace. “One of the important trends in the event business – now and in the future – is that we no longer want to rush somewhere in total stress due to heavy traffic. To reach there, in a crowded room, with loud music, where you can’t speak to anyone or to find out that there is no one interesting you would like to meet. That is why I think the work of protocol officers is very important and will become even more important.”

This is a time when many people are worried. About where we are going, about the decline of norms and values. Protocol really has something to offer, because it gives meaning. 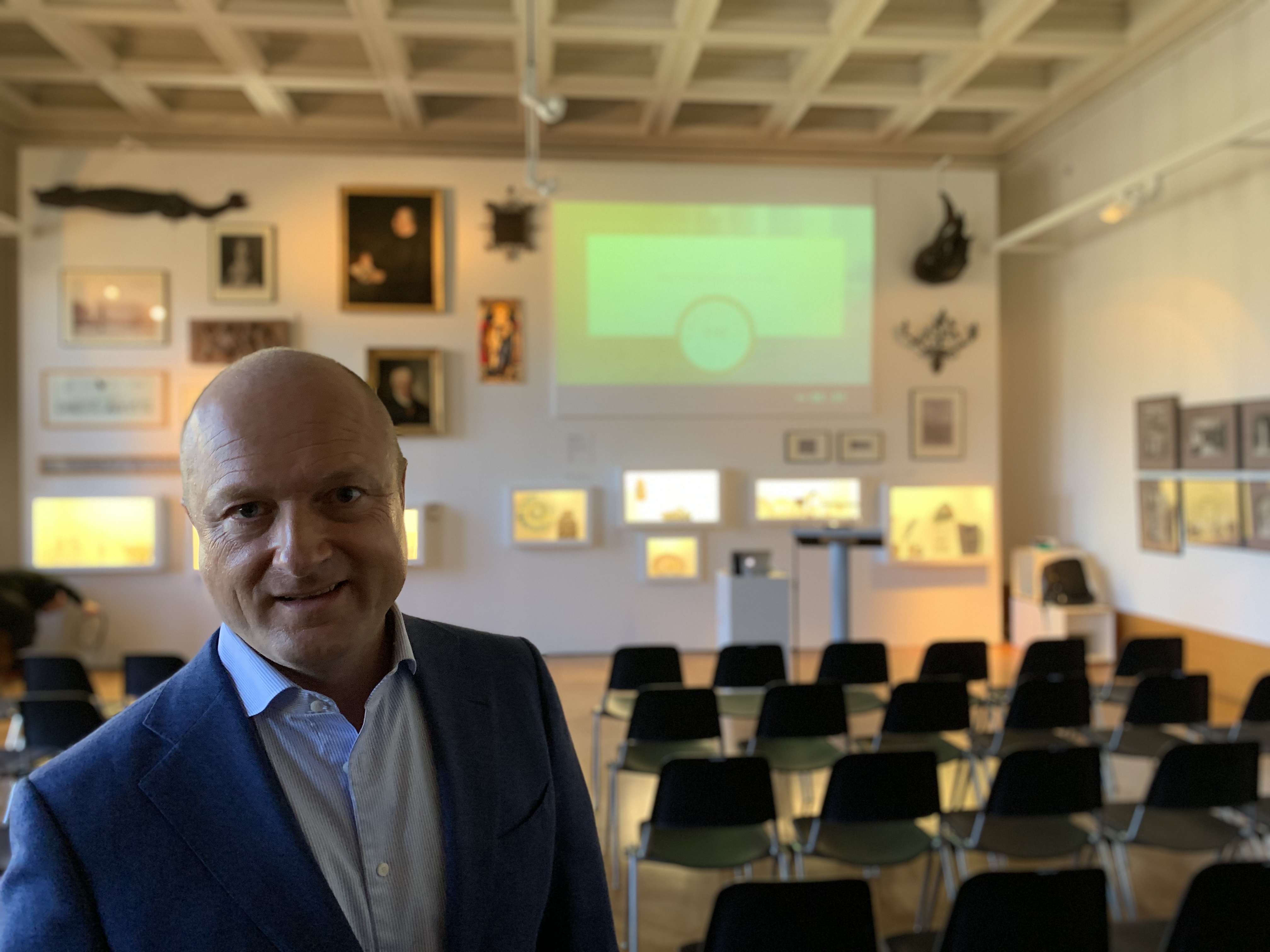 Jean Paul Wijers in Berlin for a lecture at the Stadtmuseum (2019).

Jean Paul Wijers describes the changing views on protocol and its consequences as “one of the most difficult things I have had to deal with in recent years”. He had to fight a personal battle on two fronts. One, against hardcore protocol fetishists who dismissed him as unprofessional and someone who doesn’t understand. On the other hand, to the people who saw no difference between him and the protocol fetishists, who therefore had no eye for his new vision of the more classic protocol. Which, as said, is about the rules that creates the space for authentic meetings and attention to the symbolism of meetings, but also about the added value of protocol in our time. “This is a time when many people are worried. About where we are going, about the decline of norms and values. Protocol really has something to offer, because it gives meaning. Many people call giving meaning one of the most important things in their lives. That was, and still is, one of my motives. I have always had an aversion to the meaningless, materialistic, pompous protocol, which was primarily based on ego and power. For a long time I have searched for a purer interpretation of it and in the end I found that in ‘giving meaning’. I have had this vision since my days as a student, but before I could tell this story, it was twenty years later. ”

The developments of recent years are the reason why ‘renewal’ is now an important business characteristic of Protocolbureau. “In an industry where by definition nobody is involved with innovation, I am constantly busy with innovation. We often speak of ‘modern’ protocol, but there is no new protocol, it is still the same. Only its application is different, where context and in particular the relational aspects are leading. You make a translation from the context to the protocol, which can therefore always be slightly different. Protocol fetishists do not do that, they simply apply the same rules every time. But you do see our King Willem-Alexander doing it, looking at the big picture, wondering: why are we doing this and which rule of protocol helps me with that?”

The desire for innovation led, for example, to the establishment of a second company in 2009: the Institute of Strategic Relationship Management (ISRM). This made it clear once and for all that protocol is the means and building strong relationships the goal. Since its foundation, ISRM has been providing training, advice and postgraduate courses, as well as publishing books on the subject.

Jean Paul Wijers with the new director of Protocolbureau, Bengt-Arne Hulleman, former Head of Protocol of the International Criminal Court in The Hague. 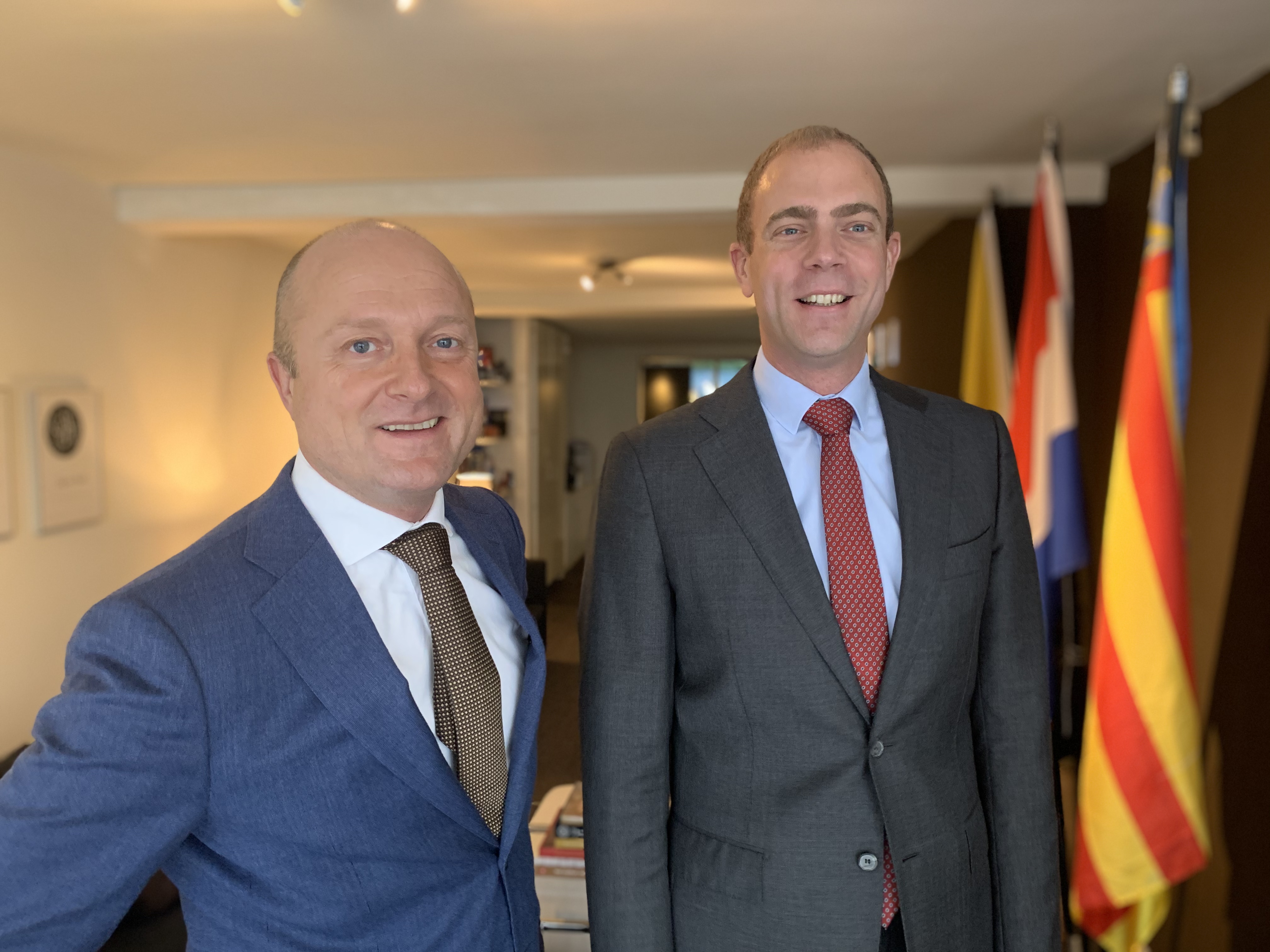 Many event managers mainly know Protocolbureau from the dozens of ushers they encounter at the INSPIRE event [the yearly networking event of the Dutch Association for Event Managers, the ‘Genootschap voor Eventmanagers‘] or hire for their own events. Jean Paul Wijers is, to a large extent, the ‘face’ of the company. This is changing. With the appointment in October 2019 of Bengt-Arne Hulleman, former head of protocol at the International Criminal Court, Protocolbureau was given two-man management. “Before that, I was the only one responsible for the management. That makes you vulnerable as a company and it is also difficult to grow. That’s why I immediately changed my approach when setting up the ISRM. That can work without me, the company – with 20 to 30 part-time teachers – is much more standardised.” Bengt-Arne Hulleman is also going to contribute to the protocol training Protocolbureau provides, in the Netherlands and abroad. “I once thought about a second location in Brussels, but I don’t think that is necessary anymore. Brussels has already become a fixed market for us, we give a multi-day training there, twice a year. Pleasingly, Protocolbureau is successful abroad, for example we also provide training in Doha, Tallinn, Frankfurt and Windhoek. It is funny to think that that success also comes from the fact that we in the Netherlands were forced to think about the usefulness of protocol!”

Jean Paul Wijers points out in the event industry events are now mainly seen as live communication. He wonders if that does not give the relational aspect of an event too little attention. “I see the event as a meeting between people. That is by far the number 1. Of course, content must always be communicated, but research shows that people often forget the communicative message within two weeks, while remembering for years who they met.”

This article is written by Carla van Elst and was originally published on the website of the Dutch Association for Event Managers, the ‘Genootschap voor Eventmanagers‘ and translated into English with the help of William Hanson (dit artikel in het Nederlands).

Read other articles about protocol and building relationships on our blog(s):

Photo’s in the Hermitage Amsterdam in this blog post are made by Steffan van Gerve.

The future of protocol